Pumping Iron Bromantane is a stimulant and anxiolytic derivative of Adamantane, developed in Russia in the late 1980s. Whether you suffer from depression, anxiety, or lack of focus and declining stamina during workouts, you may have looked for a nootropic that can give a little extra kick to keep you going. Bromantane promises to provide that kick, helping you clear the effects of depression and fatigue and keeping your brain more on task to improve overall performance.

Pumping Iron 9-MBC is a powerful nootropic often described as ‘Dopamine Like A Child Again’. 9-MBC or 9-methyl-β-carboline (9-me-bc) to give it its full name, is an industry-leading, best-in-class nootropic which delivers lasting and prolonged effects.  Unlike so many other nootropics, which wear-off after mere hours, 9-MBC promotes real neuron and neurite growth in a highly significant manner for long-term memory and cognitive enhancement. 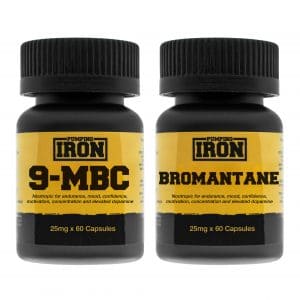