Pumping Iron Sibutramine contains 5mg x 60 Tablets. Sibutramine hydrochloride is a selective serotonin and noradrenalin re-uptake inhibitor used for the medical management of obesity. This compound is intended to be an adjunct to a reduced calorie diet, which will help increase weight loss compared to that achieved with modifying food intake alone. Sibutramine hydrochloride is not advertised as a rapid acting drug, but instead one that fosters slow, safe, and steady losses in fat mass which are maintained long-term.

Pumping Iron Sibutramine contains 5mg x 60 Tablets. Sibutramine hydrochloride is a selective serotonin and noradrenalin re-uptake inhibitor used for the medical management of obesity. This compound is intended to be a supplementation to a reduced calorie diet, which will help increase weight loss compared to that achieved with modifying food intake alone.

Sibutramine hydrochloride is not advertised as a rapid acting drug, but instead one that fosters slow, safe, and steady losses in fat mass which are maintained long-term.

How Does Pumping Iron Sibutramine Work?

Sibutramine hydrochloride exerts a weight-loss effect through two distinct mechanisms. It has a marked ability to suppress appetite, stimulate metabolism as well as daily caloric expenditure. A 10 mg dose can increase basal metabolic rate by up to 30%, which can last for at least six hours.

Sibutramine acts mainly on the brain. It is a neurotransmitter reuptake inhibitor that affects two neurotransmitters in the brain namely Noradrenaline and Serotonin leading to the feeling of fullness and decrease in the desire of eating. So its main effect is on the appetite center in the brain.

How to Use Sibutramine

Sibutramine hydrochloride may be used for the management of obesity (including weight loss and maintenance) and should be used in conjunction with a monitored and reduced-calorie diet. This drug has been used with patients who have additional ailments including controlled hypertension, diabetes, and high cholesterol.

The recommended starting dosage is 5 mg once daily, which is to be adjusted upwards to 15-20 mg after 4 weeks if weight loss has not been sufficiently initiated. Higher doses are not recommended.

According to the manufacturer, Sibutramine is indicated as part of an overall treatment plan for the management of obesity for people aged 18-65 years who have a BMI of ≥ 30 kg/m2.Have a BMI of ≥ 27 kg/m2 in addition to other health problems as Diabetes, high blood pressure or high cholesterol.

The most common side effects reported with Sibutramine use include:

Dry mouth, headache, loss of appetite, trouble sleeping (insomnia), and constipation. Other more serious side effects can develop like increased sweating, an increase in blood pressure, and an increase in heart rate. They tend, however, to be generally mild and do not require drug discontinuation.

Certain weight loss medicines have been associated with a rare, but life-threatening condition that affects the blood pressure in lungs (pulmonary hypertension). Because the condition is so rare it is not known if Sibutramine may cause this disease. If you experience new or worsening shortness of breath notify your Doctor immediately.

Who should not take Pumping Iron Sibutramine?

There are some medical conditions for which Pumping Iron Sibutramine is considered contraindicated or inappropriate:

Can Sibutramine be taken safely with any other medication?

There is a number of significant drug-drug interactions that should be considered while you are using Pumping Iron Sibutramine. The following drugs should not be used at the same time with Sibutramine since they can lead to serious effects and can be fatal, inform your Doctor if you are using one of them:

Monoamine oxidase inhibitors (MAOIs) that are used for depression or parkinsonism.Any of the agents used for dieting including over the counter medications and herbal remedies.

Medications that affect serotonin activity in the brain, can lead to development of serotonin syndrome, if used concurrently with Sibutramine. They include some of the medications used for depression, migraine headaches, and some pain medications.

Decongestansts and cough suppressants including over the counter preparations might cause increase in heart rate and blood pressure if used concurrently. Ketoconazole (antifungal), and Erythromycin (antibiotic) might affect the way Sibutramine is removed from the body.

The use of Pumping Iron Sibutramine does not interfere with the intake of nutritional supplements like vitamins, minerals and amino acids (except tryptophan) generally. However, for your own safety this issue should be discussed with your doctor or pharmacist. 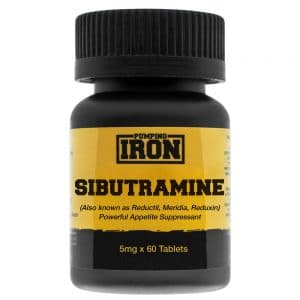