The Enhanced Athlete ECA Shred fat burner combines 5 powerful weight loss pills in one. Other than going out and buying some illegal fat burner, this is as effective of a stimulant based fat burner as you will find. Designed to give you all the benefits of fat burning without the crash afterwards.

The Enhanced Athlete ECA Shred fat burner combines 5 powerful weight loss pills in one. Other than going out and buying some illegal fat burner, this is as effective of a stimulant based fat burner as you will find. Designed to give you all the benefits of fat burning without the crash afterwards.

What is Enhanced Athlete ECA Shred?

The old school ECA stack (ephedrine, caffeine and aspirin) was arguably the greatest fat loss stack of all time. It delivered quick fat loss, insane energy and destroyed appetite. Unfortunately, ephedrine is no longer legal to purchase so the ECA stack is a thing of the past.

The supplement matrix in ECA SHRED provides all the same benefits as the ECA stack, but without the adrenal crash. Our formulations team was able to make such an effective product because all the ingredients in ECA SHRED work synergistically with one and another. This allows the ingredients to work even more efficiently than taking them individually. It’s similar to a 1 + 1 = 3 analogy.

BURN FAT – The ingredients in ECA SHRED speed up fat burning by boosting thermogenesis and increasing your body’s metabolic rate.

PREVENT FAT STORAGE – ECA SHRED contains ingredients that actually help prevent the production of new fat, meaning you won’t need to worry about gaining back any of the weight you lost.

SUPPRESS APPETITE – ECA SHRED makes calorie-cutting easy by crushing your appetite and making food cravings a thing of the past.

Let’s take an in-depth look at the science behind the ECA SHRED formulation so you can appreciate how amazing this product really is. I can confidently say that you won’t find another product anywhere that even comes close.

These hormones also boost concentrations, alertness, and focus, and provide a euphoric sensation. This euphoric high is part of the reason why DMAA became so popular. We included N-Phenethyl Dimethylamine citrate in the ECA SHRED formula to fill the gap left by DMAA prohibition.

White Willow Bark contains the active compound salicin, which acts the same way as aspirin. Salicin works as an anti-clotting agent in the blood, extending the absorption time of any active fat loss ingredient taken with it. Willow Bark also contains a spectrum of flavonoids which provide anti-inflammatory effects and reduce oxidative stress.

Theobromine is a naturally occurring alkaloid found in chocolate. There are many benefits to Theobromine supplementation including cognitive enhancement, decreased blood pressure, weight loss and fat loss. However, the main reason theobromine was included in the ECA SHRED formulation is for its positive effects on weight loss and fat loss. Research shows that theobromine helps with increasing fat metabolism and suppressing fat absorption. Not only will theobromine help increase fat loss, but it’ll help prevent fat storage, so you don’t regain any of the weight you lost.

Caffeine is the most widely used and studied dietary supplements and for good reason. Caffeine works as a central nervous and a metabolic stimulant with a number of studies showing improved physical performance, endurance, and cognitive function. Caffeine on its own has been shown to increase resting metabolic rate and caloric expenditure and also works synergistically with adrenaline to promote lipolytic (fat oxidation) activity.

Infinergy is a precise combination of caffeine and malic acid fused together by an ionic bond. The malic acid in Infinergy works to buffer the salts in caffeine, allowing for easier digestion whilst also replenishing the energy produced by caffeine, which helps to prevent the dreaded post-caffeine energy ‘crash’.

Synephrine is a naturally occurring alkaloid found in the Bitter Orange plant. Synephrine’s molecular structure is very similar to ephedrine. Synephrine functions as an alpha-androgenic antagonist just like ephedrine does, but it is much milder on the central nervous system and does not cause the same negative side effects that ephedrine supplementation can cause. Synephrine binds to receptors in fat tissue and increases lipolysis and thermogenesis.

Cocoabuterol is a natural cocoa extract containing high concentrations of beneficial polyphenols and alkaloids. Cocoabuterol is interesting because while it supports fat loss, the key is in its ability to redirect where the body harvests its resources. Instead of using amino acids or glucose, Cocoabuterol re-aims the body to start using fat tissues instead. This increases endurance by preserving glycogen stores and makes the body more efficient at burning body fat.

BioPerine is a patented black pepper extract that contains the active compound piperine. BioPerine is used in sports supplements to enhance the bioavailability of nutrients. In other words, Bioperine works by enhancing the absorption rates of whatever it’s taken with.

As a dietary supplement take 1-2 capsules per day or as directed by your physician. To assess tolerance, start with 1 capsule. For Enhanced results, take pre-cardio or first thing in the morning.

As with any dietary supplement, consult your healthcare practitioner before using this product. Store in a cool dry place. Keep out of reach of children.
THESE STATEMENTS HAVE NOT BEEN EVALUATED BY THE FOOD AND DRUG ADMINISTRATION. THIS PRODUCT IS NOT INTENDED TO DIAGNOSE, TREAT, CURE OR PREVENT ANY DISEASE.

Read our blog for more information on fat loss. 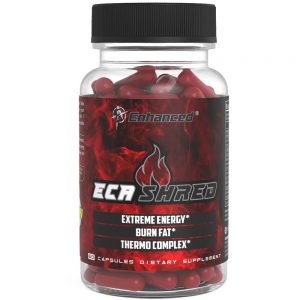