ENHANCED ATHLETE SUPERBEAST IS SOLD FOR RESEARCH PURPOSES ONLY. PUMPINGIRONSTORE.COM DOES NOT ENDORSE THE USE OF SARMS FOR HUMAN CONSUMPTION, SARMS ARE NOT DIETARY SUPPLEMENTS.

What is RAD-140 in Enhanced Athlete Superbeast?

RAD-140 is regarded as the SARM with the closest chemical structure and properties to testosterone. It has an anabolic/androgenic ratio of 90:1. In test subjects, it has produced significant effects on muscle tissue size and density. Within the physiology of test subjects, the compound cannot aromatize to estrogen.

One study performed on monkeys examined its effect on muscle growth with significant results that showed considerable increases in lean muscle mass after only 28 days.

In one study scientists were able to use RAD-140 to activates receptors in damaged sections of the brain. The resulting reaction was a signal known as the MAPK pathway which is known to protect brain cells.

What is Ligandrol in Enhanced Athlete Superbeast?

According to a clinical trial conducted at the Boston Medical Center’s Section of Endocrinology, Ligandrol can help improve lean body mass and muscle strength. Another study conducted in January 2013 found that Ligandrol can help increase lean muscle mass, and was generally well tolerated by test subjects.

What is S-23 in Enhanced Athlete Superbeast?

ENHANCED ATHLETE SUPERBEAST IS SOLD FOR RESEARCH PURPOSES ONLY. PUMPINGIRONSTORE.COM DOES NOT ENDORSE THE USE OF SARMS FOR HUMAN CONSUMPTION, SARMS ARE NOT DIETARY SUPPLEMENTS. 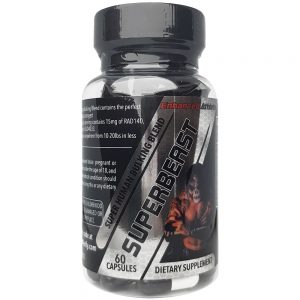